How much are you earning when you make a brew at work?

One of the quintessential British pastimes is making a cuppa. Whether that's a mug of coffee, a fancy cortado or the traditional cup of tea, we Brits love a hot drink to get us through the day. Now people are heading back into the office, we want to find out how much we’re getting paid to make our brews!

With 58% of us having regular tea breaks throughout the day, this isn’t just a social pastime that occurs at the weekend, with 41% of us using a tea break at work to connect and socialise with people, especially in an office where taking breaks from the computer screen has several health benefits. That said, why not join us on the 5th July in support of the NHS Big Tea campaign to take a break away from your screens and help raise money for incredible NHS charities?

As nearly three-quarters of Britons (73%) believe making a brew is a good break from work, how much are we being paid to carry out our drinking routines?

You could be earning almost £1,500 a year while making a brew

According to research, an average worker will take 24 minutes per day on tea and coffee breaks, which works out at 5% of a typical working day. If we calculate that over a year, on average that means 12.65 workdays are spent making tea and coffee.

If we translate this into monetary terms, using an annual average UK salary (after tax) of £26,103, employees could take home £1,305 per year while making tea and coffee during a working day. Per working day, that works out, on average, at £5.16! 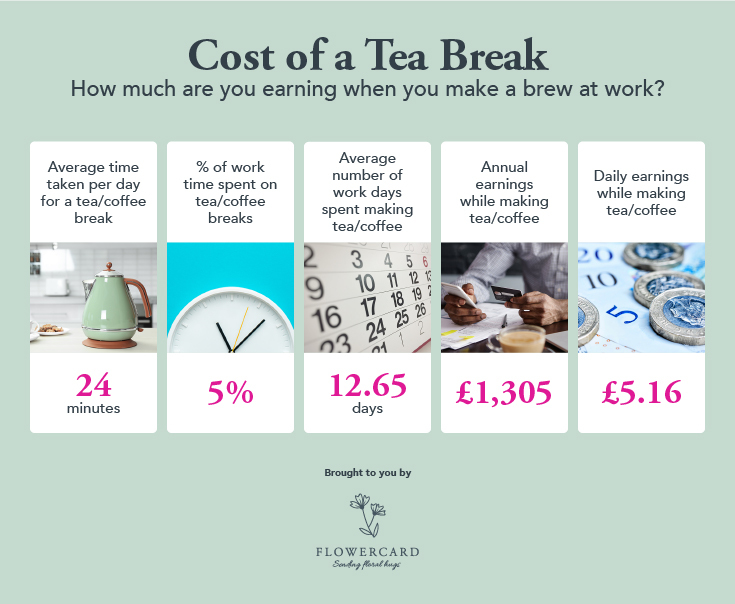 It’s now more important than ever that employees take regular breaks away from the computer during the workday, especially with more companies looking towards flexible working with the opportunity to work from home more often than the office. Getting up and making a hot drink will allow you to stretch your legs to prevent deep vein thrombosis, give your eyes a break to reduce eye strain and prevent repetitive strain injury from long periods at the computer. 60% of us agree that having a tea break provides a rest from looking at computer screens so take advantage of the health and financial benefits of your daily dose of caffeine.

According to The Law Support Group, an average worker will take 24 minutes per day on tea and coffee breaks, which works out at 5% of an eight-hour working day. We used this figure to work out the average number of workdays spent making tea/coffee based on the number of working days in 2021 (253 working days) and the average hours worked in a week in the UK (42.5 hours).

To work out how much money an employee could earn while taking a tea break we took the weekly average total pay before tax from ONS and ran it through the UK Government’s Take Home Pay and Tax Calculator which estimated the salary at £26,103 after tax. 5% of this figure provided us with the annual earnings while making tea/coffee and dividing the total figure by the number of working days in 2021 provided us with a figure for the daily earnings while making tea/coffee.

Figures taken from the NHS Charities Together YouGov Survey on British Tea Habits.