After a hectic year, we’re all looking forward to taking a well-earned winter break with our partners to relax and share new and exciting experiences with the people we love.

We analysed 35 cities on factors such as the number of Tripadvisor reviews featuring the word ‘romantic’, romantic activities per 100,000 population and the chance of snow to reveal the most romantic cities to visit this winter.

The Most Romantic Winter Cities 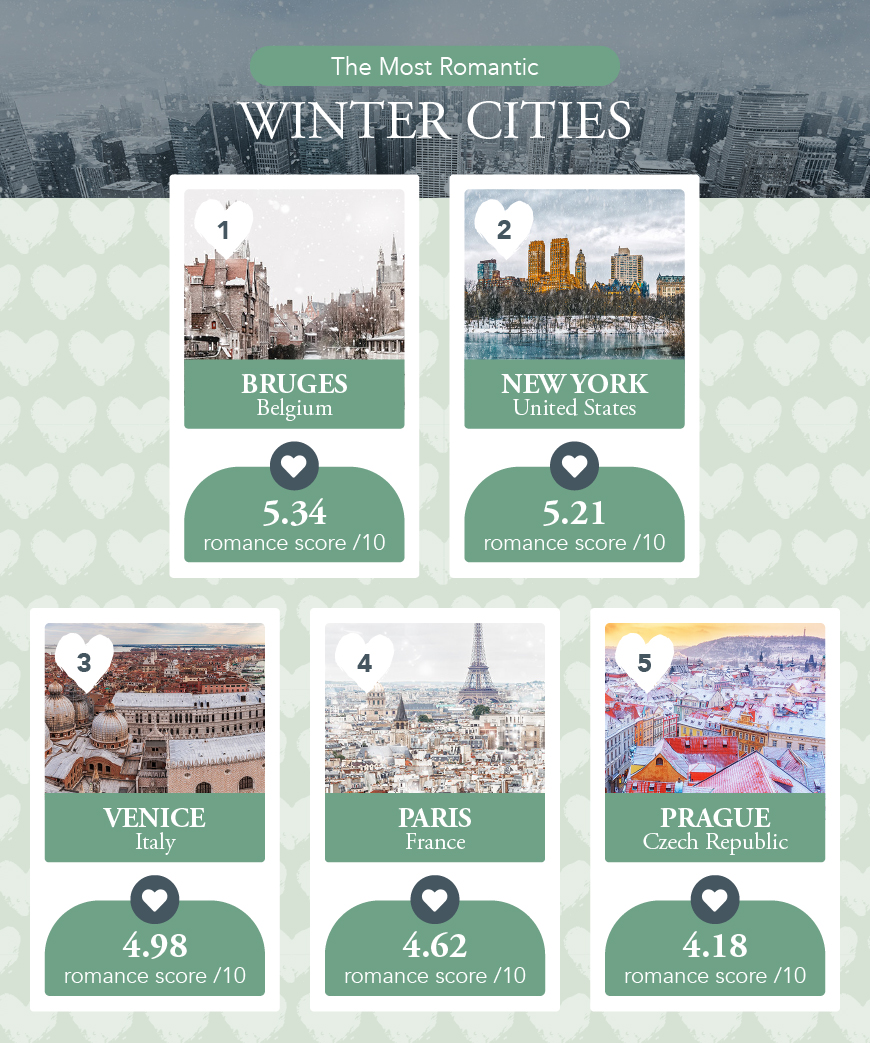 This quiet little city ranks the highest on our list. Its quaint mediaeval architecture provides the perfect fairy-tale location for a romantic getaway as it ranks highly for the number of romantic attractions. Exploring the city on foot, you’ll find narrow cobbled streets that give way to cosy squares full of warm and inviting restaurants and bars with views over its tranquil canals. Bruges is also famed for its chocolates, selling everything from pralines to truffles and chocolate figurines, so treat your partner to a box while you visit.

The city that never sleeps also doesn’t seem to hibernate either, with one of the highest rankings for the number of reviews featuring the word “romantic”. Over winter the city flourishes into a romantic wonderland, with pop up ice rinks appearing around the city from October onwards. Winter is also an ideal time to visit the Empire State Building, with the frosty air adding something especially romantic to the already breathtaking views.

Winter in Venice is the perfect time to discover parts of the city usually crowded by tourists. Grab a blanket and go for a gondola ride for two to explore the floating city by its deserted waterways. Or walk arm-in-arm through St Mark’s square to take in the sights and sounds of the city once home to Casanova, one of history’s most famous lovers.

Free from the usual tourist crowd of summer, Paris in winter is even more romantic. The city of love plays host to some of the most romantic sights and landmarks ranking highly for the number of romantic attractions on our list. You could climb the Eiffel Tower with your partner, finishing with a glass of champagne looking out at the astonishing view of one of the world’s most romantic cities.

Full of breathtaking views, narrow cobblestone streets and pastel-coloured buildings, Prague is undoubtedly one of the most romantic cities in Europe, ranking highly for “romantic” reviews. Show your cultural side by taking your partner to the opera, theatre or ballet as the three main venues for these romantic delights are open throughout the year. 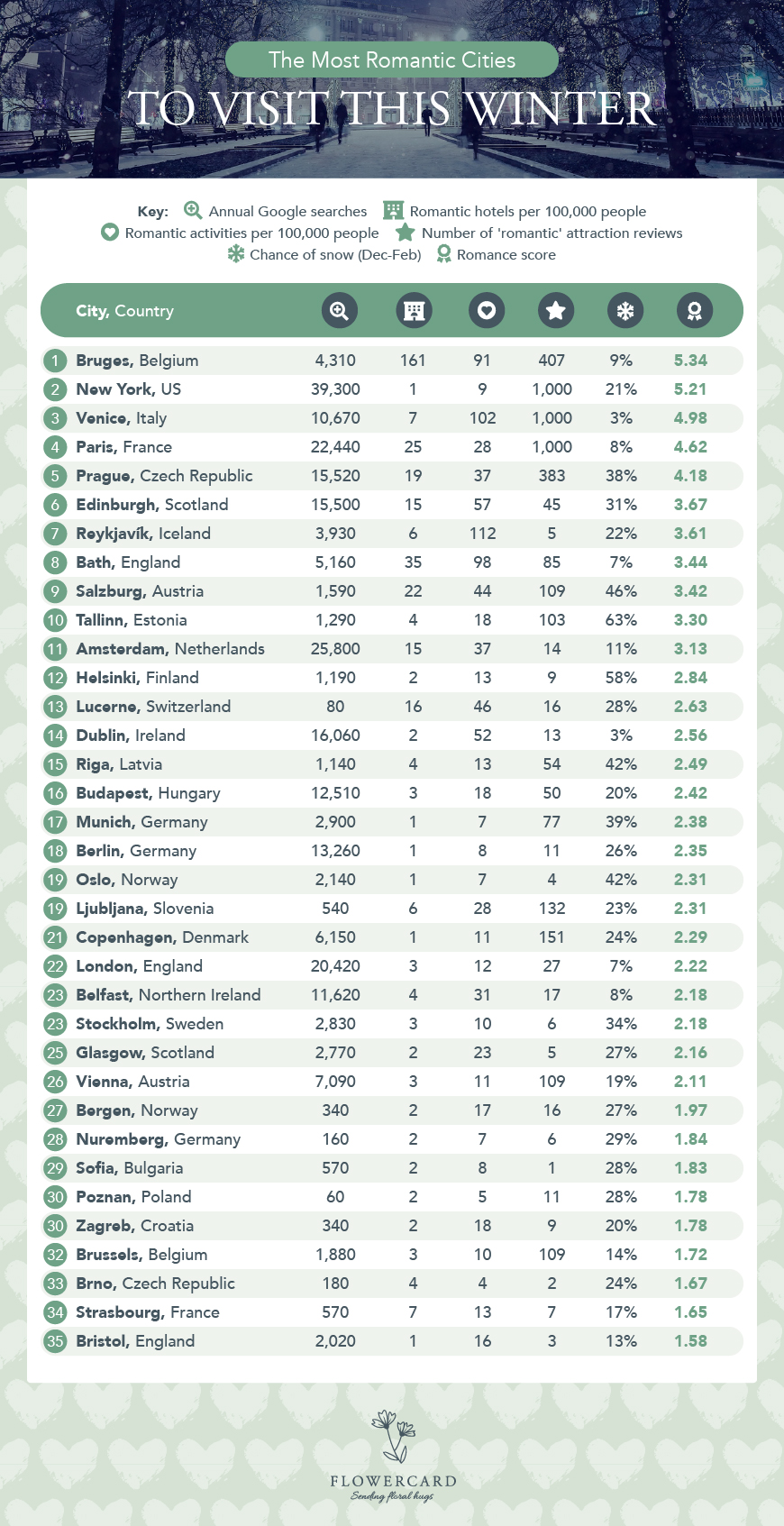 The best city for…

New York is the most popular city break destination on our list, 14,000 searches ahead of second-place. New York is one of the leading global centres for culture and cuisine, featuring some of the world's best art galleries, museums, theatres and restaurants for couples to explore.

If relaxing with your partner is the first thing that comes to mind for your winter city break, Bruges is the ideal place. It has the most hotels listed as romantic, making it easy to find the perfect place to relax and unwind with your partner after a long day of exploring the city.

While not being well known as a romantic city, Reykjavík offers plenty of activities for couples. Due to the city’s low light pollution, the northern lights are visible in most parts of the city so you could spend a romantic night chasing the aurora around town.

New York also tops our list for the city with the most reviews that highlight its romantic nature. With its iconic skyline visible from the Brooklyn Bridge or the High Line, this city provides the perfect location for long romantic strolls or a cosy handsome cab ride around Central Park.

If snowy weather is a must for your romantic winter city break, Estonia’s capital Tallinn is the destination for you. Topping our list with a 63% chance of snow from December to February Tallinn is the country’s cultural hub. There are also plenty of opportunities to explore its charming old town, complete with cobbled streets and plenty of cafes and bars to cosy up in with a partner.

Beginning with a list of cities gathered from list articles, we looked at 35 cities around the world.

These cities were ranked by the following factors, giving each city a score out of ten on each factor, before taking an average for our overall score.

The number of global Google searches for “[city] break” between November 2020 and October 2021 according to Google Ads Keyword Planner.

The number of hotels listed on Tripadvisor as being romantic, calculated per 100,000 people.

The number of things to do listed on Tripadvisor as being good for couples, calculated per 100,000 people.

The number of Tripadvisor reviews that mention the word “romantic” on the city’s highest-ranking romantic attraction.

The chance of having a snowy day between December and February, calculated by taking an average number of snow days from Weather25.com and diving them by 30.